Islamabad, Pakistan – Pakistani Prime Minister Imran Khan returned from a three-day visit to the United States to the Pakistani capital early on Thursday, greeted by scores of jubilant political supporters following what his government is touting as a successful “reset” of the two countries’ often-troubled relationship.
“Today I felt not as if I have returned from a foreign trip, but as if I have returned after winning the [cricket] World Cup,” Khan, a former cricketer, told supporters at Islamabad’s airport in the early hours of Thursday.
Khan met US President Donald Trump on Monday, with both sides reaffirming their commitment to the Afghan peace process and the US president offering his services to mediate in the Kashmir dispute with India has rejected the proposal.
Lieutenant-General Qamar Javed Bajwa, Pakistan’s powerful military chief, accompanied the prime minister, along with intelligence chief Lieutenant-General Faiz Hameed.

Khan and his delegation also held meetings with US Secretary of State Mike Pompeo, US congressional leaders, and the heads of the International Monetary Fund and the World Bank.

On his return, the prime minister struck a defiant tone, where he asserted that Pakistan was seeking a “reset” of its relationship with the US in order to be seen as an equal partner.

“Never have I bowed before anyone, and neither will I ever let my nation bow before anyone,” he said. “We must become a self-reliant nation.”

Spoke with analysts in Washington, Islamabad and New Delhi to assess the visit.

How did the visit go, from the perspective of both the US and Pakistan?

Kugelman: I think both sides got what they want. Washington’s aim was to pull out all the stops and showcase its appreciation to Pakistan for the help that Islamabad has provided in Afghanistan over the last year. And that is what it did, with Pakistan clearly grateful for how Khan was treated by his American hosts.

I imagine there was also an ulterior motive at play: Washington hopes that the goodwill generated during Khan’s visit will prompt Pakistan to do even more on the Afghanistan front.

For Pakistan, the hope was to get the recognition that it feels it often doesn’t get for the assistance it has rendered to the US. And that recognition was certainly there, as evidenced by all the effusive praise and kind words from many top US officials.

What do you expect the next steps will be on talks with the Taliban?

Kugelman: I don’t think the “do more” rhetoric has gone away, it has just gone a bit softer. Whereas in the past this message would be delivered forcefully and threateningly, this time around it was likely conveyed gently, with Trump and other US officials inviting Islamabad to take its assistance in Afghanistan to another level.

What’s next with the Taliban talks depends on Islamabad’s next move, and more importantly how the Taliban responds. Washington’s asks of Islamabad have become more ambitious. It’s one thing for Pakistan to simply bring the [Taliban] to the table. It is a very different thing for Pakistan to convince [them] to agree to demands – a ceasefire and talks with Kabul – that it has consistently and categorically rejected to this point.

What is your reading on President Trump’s comments on Kashmir?

Kugelman: I think he was simply acting in the moment. It was a spontaneous, off-the-cuff remark that certainly wasn’t meant to represent what would be a dramatically new US policy.

How much follow-through should we expect from Pakistan?

Kugelman: Pakistan appears to be genuinely invested in helping see through a successful peace process in Afghanistan – mainly because it wants to help shape an endgame that serves its interests. And for Islamabad, that means a post-conflict Afghan government in which the Taliban has a major role.

How did the visit go, from the perspective of both the US and Pakistan?

Akbar: For Trump, one of the most significant outcomes of the Washington visit by PM Khan and the military leadership will be Islamabad’s renewed commitment to finding an inclusive and peaceful end to the long war in Afghanistan.

For Pakistan, the visit has been a win on two fronts. First, Khan has been able to generate significant positive momentum through the visit while his government faces stiff opposition at home. This will help Khan in Pakistan.

Secondly, Pakistan’s leadership has engaged directly with the Trump administration at the highest level, something seen as key in building a working relationship. It has also fought its case on counterterrorism efforts, action under the Financial Action Task Force, and Pakistan’s regional priorities both at the White House and on Capitol Hill. 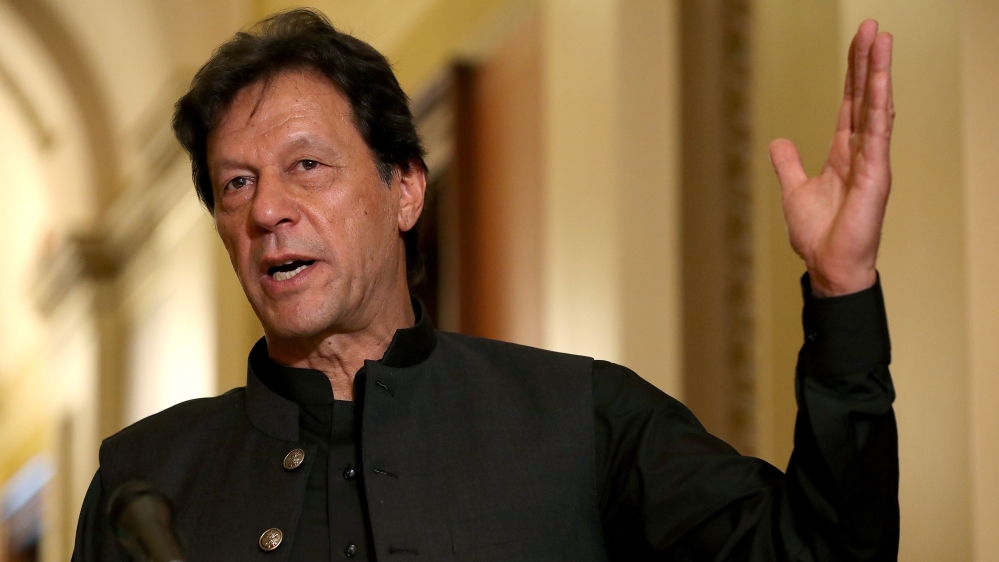 Pakistan Prime Minister Imran Khan makes a brief statement to reporters before a meeting with US House Speaker Nancy Pelosi at the US Capitol in Washington, DC [AFP]

What do you expect the next steps on the Taliban talks will be?

Akbar: Faced with a short timetable on reaching an agreement before the September [Afghan] presidential election, Washington sees an intra-Afghan dialogue and a ceasefire as essential towards finalising a withdrawal, which will be crucial in Trump’s reelection bid next year.

Imran Khan has indicated that Pakistan will exert maximum pressure on the Taliban to agree to an intra-Afghan process. It’s also significant that the PM mentioned that Pakistan would like the Taliban to be part of an inclusive presidential election. This indicates that the timeline of concrete action on Afghanistan will be swift in the coming months.

The demands from Washington have not changed. While it is significant that the US has publicly acknowledged Pakistan’s efforts in pushing the reconciliation process and initial steps to curb militant groups, privately the US would have rehashed its menu of concerns and sought commitments on them.

What is your reading on President Trump’s offer to mediate on Kashmir?

Akbar: They were unexpected and generated considerable interest in Pakistan and India. While Trump is known to obfuscate facts, it is difficult to believe that he would have associated remarks to Indian Prime Minister Narendra Modi in such detail without a conversation on a US role in engagement between India and Pakistan.

It is more likely that Modi mentioned US help in managing the India-Pakistan relationship rather than mediation.

Irrespective of whether Modi requested mediation or not, the mention of Kashmir was a big win for Pakistan. This will also create pressure on the Modi government. If there were any stirrings of engagement between the two countries, the backlash from the opposition and a hardline media in India would have the Modi government reconsidering any outreach in the immediate future.

How significant is that offer?

Akbar: It is unlikely to move the needle on the ground in Kashmir. Real progress on the Kashmir dispute cannot be made unless New Delhi changes its approach towards political repression in Kashmir. In the absence of a substantive political outreach from New Delhi towards Srinagar, any progress on Kashmir between India and Pakistan will be beholden to the ground situation on human rights and violence inside Kashmir.

What effect does the positive chemistry seen between the two leaders have on the relationship?

Akbar: Trump is known to put a lot of political capital on the basis of his personal relationship with world leaders. It seems Khan and Trump have built a comfortable equation, this will help. But the challenges dodging the Pakistan-US relationship such as Afghanistan, terrorism, India and China have significant input from US administration. Those channels remain the same and talking points are unlikely to change significantly.

How significant was it to have Pakistan’s military and intelligence chiefs as part of these meetings?

Akbar: The Pakistan-US relationship has a significant security angle. Having Pakistan’s military and intelligence leadership on board sent a signal that there was unanimity of views on commitments by Pakistan.

How will the Indian government be taking what appears to be a successful visit by the Pakistani Prime Minister to Washington, DC, with both sides affirming a commitment to work together and harsh US rhetoric notably absent?

Joshi: Cautiously. One leg of [India’s] foreign policy – hostility to Pakistan – has become shakier. The fact that the US was also critical of Pakistan in the past few years made New Delhi’s policy appear strong, now it will have to adjust.

On Trump’s comments on mediating in Kashmir: how has Delhi reacted, and what does this do – if anything – to affect the state of play when it comes to resolving Kashmir?

Joshi: The government of India has simply denied that any such conversation occurred [between President Trump and Prime Minister Modi]. It does indicate that the free run India has had from the US on the Kashmir issue is now at an end and you may get some critical comments and maybe even policy interventions from the Trump administration.

Given that Trump alluded to Prime Minister Narendra Modi “asking” for him to mediate, how does this affect Modi’s domestic political standing, if at all?

Joshi: The [domestic] audience will believe Modi and the government because Trump’s reputation on these issues is not very good and also most importantly, the request was completely out of the character from the point of view of Indian policy until now, which has rejected mediation in any form even in the difficult decade of the 1990s.

On armed groups such as Lashkar-e-Taiba and Jaish-e-Muhammad, both Pakistan and the US appeared to be on the same page during the meetings, and the US did not appear to take a particularly harsh line on Pakistan. Is this an affirmation of Pakistan’s avowed crackdown on these groups?

Joshi: Yes, I think the US is giving Pakistan some latitude to crack down on these groups, but if there is another incident which is traceable to Pakistan-based groups, it will undermine Imran Khan’s credibility.