The highly anticipated, Galaxy Note 10 Series has been in the pipeline of rumors since last month. We had been getting a lot of leaks regarding the handsets as well. Recently, Galaxy Note 10/+ Aura Glow Colored variant got leaked together with blue S Pen.

The tipster Ishan Agarwal has shared a new high-res render that revealed the Galaxy Note 10 series in the Aura Glow color. It can also be clearly seen that the S-Pen is in Blue Color. Furthermore, it is said to support “Air Action” gestures which will allow the S Pen to do actions without touching the display. Let’s have a look at the render. 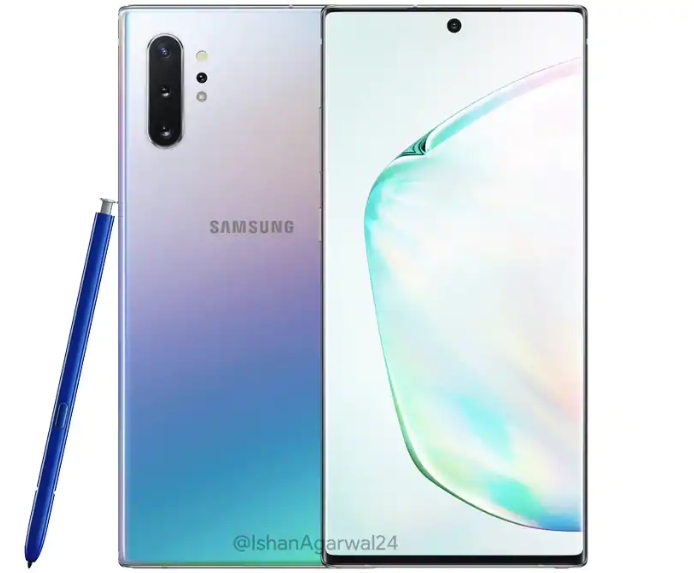 According to the previous reports, the Galaxy Note10 price in Europe will start at €999 ($1,125). On the other hand,  the Note10+ price will be €1,149 ($1,295). The base models of both smartphones will come with 256GB storage. Moreover, Galaxy Note10 will feature a 6.3-inch screen while the Note10+ will come with a 6.7-inch panel. The series will also get a 5G version. In addition to that, Note10+ will come with a single front-facing camera with its centered punch hole. However, it will have smaller bezels than the Note9, and the new arrangement of the rear camera island.

Samsung is all set to wrap off the series on August 7. All the Samsung lovers have been waiting anxiously for the first appearance of the new handset at the event on August 7. So, let’s wait and watch what comes next ahead of its launch. Till then stay tuned for more updates.