Who Is Major Raja Aziz Bhatti?

Major Raja Aziz Bhatti (Urdu: راجہ عزیز بھٹی . 6 August 1928– 10 September 1965), born as Aziz Ahmad: but usually known as Raja Aziz Bhatti, was a military officer in the Pakistan Army who was cited with the Nishan-e-Haider (Eng. Lit.: Emblem of Lion) for his actions of valor during the Battle of Burki in second war with India in 1965.

Prior to gaining officer’s commission in the Pakistan Army, Major Bhatti served in the Pakistan Air Force as enlisted personnel and left the air force as a Corporal in a favor of transferring to the Army. His brief career in the military was subjected to be as a staff officer working on administrative positions in the Pakistan Army, and widely popular as the “Muhafiz-e-Lahore” (Protector of Lahore).

In 1997, he was subjected to a critically acclaimed biographical war drama telefilm, Major Raja Aziz Bhatti, produced by the ISPR and directed by Salim Tahir of the PTV.

Raja Aziz Ahmed Bhatti was born in British Hong Kong on 6 August of 1928 into a Punjabi Rajput family.[4] His family originally hailed from a small village that was located about 110 miles away from the Gujrat District of Punjab in India who had emigrated to British Hong Kong after his father and two uncles found employment in the Hong Kong Police Force. His father, Mohammad Abdullah Bhatti, was an alumnus of the Queen’s College in Hong Kong who later served as an Inspector in the Hong Kong Police Force. Aziz Bhatti was educated in Hong Kong where he completed his matriculation and attended the Queen’s College in Hong Kong but his education was halted due to the Japanese invasion and occupation of Hong Kong in 1941. He was drafted in the Imperial Japanese Navy in 1944, first serving at the rank of the seaman recruit and as the tower watchman (observation post) before being directed to attend the officer school offered by the Imperial Japanese Navy due to his educational qualifications.

However in December of 1945, the Bhatti family relocated to India, and Aziz Bhatti enlisted to join the Royal Indian Air Force as an airman in June of 1946. After the establishment of Pakistan in 1947, Bhatti joined the Pakistan Air Force and promoted as Corporal (Cpl.) in the Pakistan Air Force, which he continued to serve in the air force until 1948.[4] Cpl. Bhatti was a prospective candidate to join the famed Air Force Academy in Risalpur and was known to be as brightest that the Air Force had seen in its early years.

On 21 January 1948, Cpl. Bhatti submitted an application to the Ministry of Defense (MoD), asking to be transferred to the Pakistan Army, which was approved and Bhatti was directed to attend the Pakistan Military Academy in Kakul in 1948. At the PMA in Kakul, he distinguish himself in studies and athletics among his classmates, and passed out from the military academy at the top of class in the class of the 1st PMA Long Course and was conferred with the Sword of Honor and the Norman gold medallion by the ceremony’s chief guest, Prime Minister Liaquat Ali Khan in 1950. He was commissioned as the 2nd-Lt. in the 4th battalion of the 16th Punjab Regiment (4/16th Punjab Regiment). He was promoted as a Lieutenant in 1951 till 1953–later promoted as a captain from 1953 until 1956.

In 1956, Capt. Aziz was sent to Canada to attend the staff course at the Canadian Army Command and Staff College where he remained in Canada until graduation from strategic studies courses in 1960. Upon returning to Pakistan, Capt. Aziz was posted with the 17th Punjab Regiment as a General Staff Officer (GSO) until 1962. After being promoted as Major in the Army in 1962, Maj. Aziz was taken in the faculty of the School of Infantry and Tactics in Quetta, which he remained until 1964.The Indo-Pakistani war of 1965

From January 1965 till May 1965, Maj. Bhatti served as the General Staff Officer (GSO) of the 17th Punjab Regiment but was later posted as the commander of the two military companies after the Indian Army’s launching the invasion by crossing the international borders in September of 1965. Leading the military companies, Maj. Bhatti was initially deployed on the forward positions of the BRB Canal near the Burki area that falls in the vicinity of the Lahore District in Pakistan-side Punjab.: contents[10]

Despite being offered to see his family in Lahore and rest up, Maj. Bhatti refused to take up the offer and instead told an army sergeant that: Do not recall me. I don’t want to go back. I will shed the last drop of my blood in the defense of my dear homeland.[13] Maj. Bhatti moved towards building up the trenches and positioned himself towards forwarding observation to view the enemy armory movements, where he would often stand for a better view to give orders to the artillery units on which direction to fire the muzzled shell from the Howitzers.:231[14]

On 10 September 1965, Maj. Bhatti was on a routine when he stood up from his trench to observe the enemy position despite being warned by army sergeant to take cover and move out of the target– the advise was unheeded by Maj. Bhatti and justified his actions of taking a better view of before order the artillery of targeting the Indian Army’s armory. Maj. Bhatti was eventually hit by the tank shell on the shoulder and was killed in an impact on the ant. Maj. Bhatti was 37 years old when he attained martyrdom in conflict on 10 September 1965.[4] 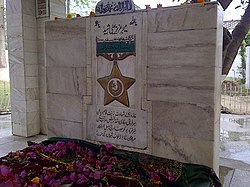 The Gravestone of Maj. Bhatti with the Nishan-e-Haider citation.

Maj. Aziz Bhatti was buried in the courtyard of his ancestral home at Ladian, a small village near Gujrat, Punjab in Pakistan.[16] In 1966, the federal government accepted the recommendations and announced to posthumously award the Nishan-e-Haider for his gallant and actions of valor during the defense of the Burki.

Later the federal government-funded to build the marble tombstone at his ancestral home in 1967 at his locality.

The Presidential Nishan-e-Haider citation on his grave is written in Urdu and is actually a poem; and its reads with translation as:

Rouge on the face of Shahadat, the pride of the country and the nation are these fearless warriors, a strike of their sword wipes out the mightiest of foes this one who came out victorious in the struggle for the cause of ALLAH is lying here in the delight of the afterlife dream. Major Bhatti fought valiantly on Lahore Front and is posthumously presented with the Nishan-e-Haider.