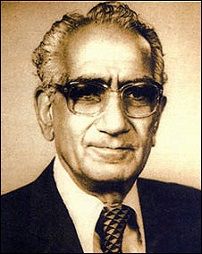 Abu-Al-Asar Hafeez Jalandhari Pakistani writer, poet and, above all, composer of the National Anthem of Pakistan. He was born in Jalandhar, Punjab, British India on January 14, 1900. After the independence of Pakistan in 1947, Hafeez Jalandhari moved to Lahore. Hafeez made up for the lack of formal education with self-study but he has the privilege to have some advise from the great Persian poet Maulana Ghulam Qadir Bilgrami. His dedication, hard work and advise from such a learned person carved his place in poetic pantheon.

Hafeez Jalandhari actively participated in Pakistan Movement and used his writings to propagate for the cause of Pakistan. In early 1948, he joined the forces for the freedom of Kashmir and got wounded. Hafeez Jalandhari wrote the Kashmiri Anthem, “Watan Hamara Azad Kashmir”. He wrote many patriotic songs during Pakistan, India war in 1965.